Cars are one of the most necessary things in human life. There are tons of cars created so far in the past 30 to 40 years.

In the early times, there were classic cars which the people of those times used a lot. The shape and specification of those cars were way different than the cars coming in the market now.

In recent time, there was the capacity of less fuel, space, and other things. But in recent times, there are different cars designed for the peoples on which they can get all the facilities easily.

There are different automatic cars and manual cars introduced in the recent times which not only gives you a smooth driving experience but also provides you some other facilities like fridge, massage, a place for dinner, a place to sleep, and many other things to include.

I am mentioning some of the best selling cars in the world of 2017 below.

The list is provided by the Forbes, and there is also a picture available for the readers about some of the other cars which were also considered by the Forbes as the best selling cars. 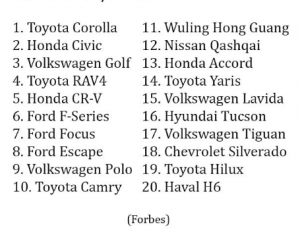 Umair Saif Sayings About What is Killing Startups in Pakistan