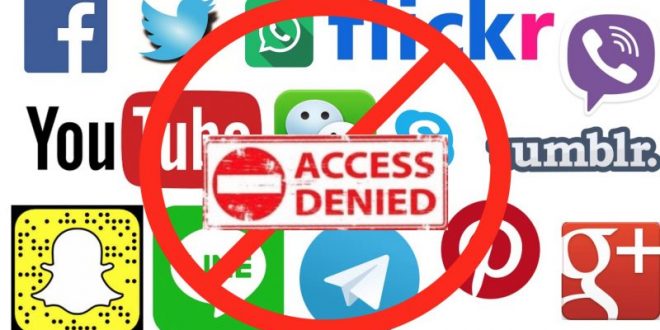 On the opposite hand Pakistan Electronic Media Regulatory Authority (PEMRA) banned all of the Pakistan information channels to broadcast under the act of PEMRA 2015.

This situation is has occurred on Saturday morning when Pakistani government took a decision to crack down on the protesters sitting in the capital form past 20 days. Things get worse after that crackdown started in the morning at 7 AM PST. In response to that people came out in other cities of Pakistan in the support of those protesters.

Social Media and Electronic Media gave them full coverage and showing each and every prospect of what happening. Protesters sitting in the Faizabad (the place between twin city of Pakistan) are presenting their views on Facebook and YouTube through Facebook Live and YouTube Channels.

So the Pakistani government decided to block all the medium of communication between protesters and the rest of the country.

First PEMRA blocked all the news channels of Pakistan to stop on-air their channels until the order of government and then PTA blocked social media sites Facebook, Twitter and video sharing sites also YouTube and Daily Motion.

According to PTA, there is no order of blocking mobile phone service in Pakistan so far.

Million of Pakistanis were relying on social media site especially Facebook and private television channels to remain update from whats going on in the country following the Islamabad crackdown.

After an hour of the crackdown on the protesters sitting in Islamabad. PEMRA stop private news channels from live coverage of crackdown because it will encourage other people in rest of the country.

As the electronic media goes down people move towards social media sites for information and also sharing their views on whats going on in the country. But after few time Facebook, Twitter, YouTube and Daily Motion sites are also blocked by the authorities to stop information from tricking out.

We are aware of reports that the Pakistani government has taken action to block Twitter service, as well as other social media services, and that users are having difficulty using Twitter in Pakistan. We are monitoring the situation and hope service will be fully restored soon.

So the question begins how to access social media sites like Facebook, Twitter and YouTube if they are blocked in your country. Well, mostly Pakistanis are accessing it through VPN and sharing their views and remain updated from the situation going on in their country.

But if you are the non technical person or don’t know about Virtual Private Networks (VPN). Here I will tell you the ways how you can access any site which is blocked by the authorities of your country.

There are lots of methods but I’m sharing few of them which I used and they work perfectly. Following are the ways to access block social media and other sites you want: