Allama Zameer Akhtar Naqvi is a well known scholar and preacher passed away in Karachi on Sunday.

Allama suffered a heart attack and was shifted to Agha Khan University Hospital on Saturday night. 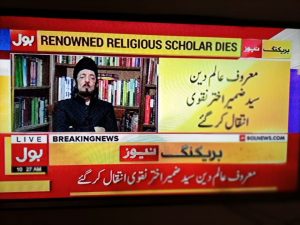 Dead body was taken to Ancholi Imambargah where his funeral prayers will be held.

He was the author of 300 books in different fields, some of his books including Literature, Culture, Religion, Philosophy, Logic, Journalism, Sociology, Science, Oratory and Language.

Allama was known for his lectures, which he has given on topics such as science, philosophy and history.

He was the president of Mir Anees Academy and also Chief of Editor at Quarterly magazine Al-Qalam.

Stock Gold Before the Second Wave of PLANDEMIC