Can You Get COVID19 From Currency Notes? Mixed Evidence, But Do Take Precautions, Experts Say

According to Muhammad Mustafa Ahmedzai,

In coming days you will see finance officials mocking and condemning the use of paper currency.

It’s a cycle that repeats every half a century.

IMF and world bank which feeds on free floating fiat paper currencies were crafted after the blood bath of world war 1 and 2.

Through IMF they controlled governments, and now through an electronically controlled monetary system they want to control and track economic activity of individuals. FROM STATE CONTROL TO INDIVIDUAL LIFE CONTROL.

You know why they always win?

Thanks to ignorance and fear that dominates dead humanity.”

Is This CoronaVirus Thing All About Cashless Society? 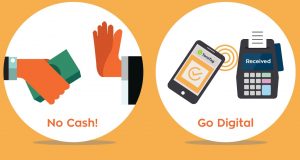 The World Health Organisation (WHO) has advised people to use contactless technology instead of cash as banknotes may be spreading coronavirus.

The infectious COVID-19 virus could be carried on the surface of banknotes for several days, the WHO warned on Monday night.

To stop the spread of the disease, people should use contactless payments where possible and wash their hands after handling cash, a WHO spokesman said.

The Bank of England also recognised that banknotes “can carry bacteria or viruses” and encouraged frequent hand washing.

Coronavirus is part of the cashless society & absolute state domination agenda. Whether I live or die, I am thankful I tried my level best to expose future motives of this filthy international establishment aka UniCorp.

2020 is the year of execution and a lot of bloodshed is on its way.

Its a pre-planned event to crash the global economy and replace it with a new monetary system based on an electronically controlled cashless medium of exchange.

In coming days News Headlines will be about Bank Employees getting infected. Cashless Strategy Move#2.
#coronavirus

Coronavirus Vaccine Will be Out Soon?

Vaccine by UniCorp will be released once their face saving tactic of over 200-400 deaths in USA is complete. I repeat the vaccine of this biological virus was created ever since US started threatening China about Silk route and it’s growing economical influence.

USA is a super power and it will remain a super power with Israel as it’s sub head quarter because to become a super power in this world, you need to be a Satanic worshipper with no heart and feelings, only then you can treat mankind as herds of sheep.

My sympathies with China, Italy and Iran and everyone else.

Why USA attacked European nations also? Because after world war 2, Europe become submissive till war on terrorism but in recent few years NATO was not performing as USA wanted and US grip was slowly decreasing over Europe as they wanted better trade relationship with China and NO to future wars. USA had to bring them under its influence once again and thus it showed them who is still the true Boss.

In coming weeks you will hear bank employees becoming victims of coronavirus because a complete cashless society and absolute state domination is another agenda that UniCorp wish to achieve behind the curtains after it has successfully tempered China and shown local establishments of its new weapon.

In this same year “the middle east peace plan” of converting Palestinian lands into internationally recognized territory of Israel will be accomplished because now the Arabs have witnessed the worst face and yet new weaponry of USA and hardly Any one will resist it.

There will be a lot of bloodshed this Ramadan in Palestine and Syria and the worst part is that the world will keep watching. 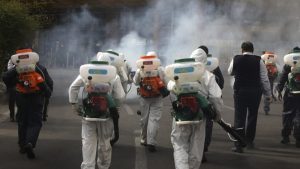 Iran is suffering today because decisions are made by religious clerics and not people who understand science.

When your religious sentiments outweighs your rational thinking, no one can help you.

How on earth can our clerics think that Allah, the Most Merciful, wants you to bow before Him in a closed gathering with less than an inch distance and hope nothing will happen? REALLY?

Allah made us humans not chimpanzees, start using your brains. I am not afraid of death but afraid of these scholars, the same scholars who once told us that the printed Quran is haram because its printed by metal plates with black ink in it. I am referring to the 200 years ban on Quran printing by Ottoman empire when Germany first invented the printing press machine.

The same scholars in Iran kept mocking coronavirus and many of them died because of it. Our scholars are making the same mistake.

It’s a virus and don’t play with people’s emotions with your baseless arguments.

Indeed Allah’s Prophet PBUH ordered to offer prayers even during wars but even in that situation 50% soldiers would pray while the others would guard. You know why because that was a 50% precaution as the enemy was physical and could easily be seen with eyes. But in case of pandemic your enemy is invisible. How on earth can you go so dumb to invite thousand of people sick and healthy under one roof and expect nothing would happen?

Remember Allah does not interfere in affairs of human beings. If you think you are Muslim and that gives you a certificate of immunity to coronavirus then please proceed and test your PHD in stupidity.

Creating a vaccine is like breaking a complex code. Only a coder knows the backdoor. China won’t be able to create the vaccine but UniCorp already has one.

Disclaimer: The Credit Goes to the One and Only M. Mustafa Ahmed Zai, Check out his Blog: BitCoinIsScam!