Edward Snowden was born on June 21, 1983, in Elizabeth City, North Carolina, United States. His family was moved to central Maryland, the place was at a short distance from the NSA headquarters at Fort Meade.

The beginning of his education remains a question for him as he dropped out of high school. He later got a chance to study intermittently between 1999 and 2005 at a community college.

Later he completed a GED but did not have a college Degree. In 2004, he managed to be in the list of Special Forces in the U.S army but was discharged after four months.

In 2005, he got a chance to work as a security guard at the center for advanced study of language, in University of Maryland research facility which was affiliated with the NSA (National Security Agency). 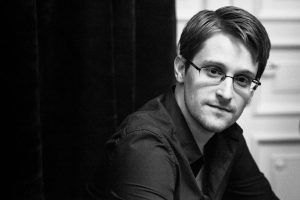 Without any proper education and experience due to his luck, Snowden passion for computers managed him to be hired in the Central intelligence agency in 2006.

In 2007, after giving the full fledge clearance he was posted to Geneva, where he worked as a Network Security Technician under a Diplomatic Cover.

The remaining Story is interesting and would be shocking for all the readers.

In the biography section, we have discussed all the necessary information about Edward biography and also mentioned his education and life experiences.

In 2009, Edward who was working for the CIA left his job. He worked as a private contractor for companies like Dell and Booz Allen Hamilton.

In the meantime, this guy started gathering information on a few of the NSA activities. One of the main things on which he was collecting information was the surveillance programs. Those were the program which in his eyes was broad in size and scope.

In 2013, this man took a medical leave of absence and plans to take a flight for Hong Kong. He met with a journalist there from The Guardian and Filmmaker Laura Poitras and discussed all the activities happening in the NSA.

In the career of his IT work in NSA, Edward collected a lot of information about NSA Surveillance on daily basis.

While working with for Booz Allen, he started the work of copying all the disturbing activities and generated a detail file of that information. All this information linked with the NSA’s domestic Surveillances Practices.

When he realized of collecting the huge amount of information that would be enough information for the world, he urged his Supervisor in NSA to grant him leave of absence for some medical reasons, he further mentioned that he had been diagnosed with epilepsy.

On May 20, 2013, he took a flight to Hong Kong, China, Snowden conducted a meeting with the journalist from the U.K publication The Guardian as well as filmmaker Laura Poitras.

In the next month, On June 5, the U.K publication releases the secret documents provided by the computer enthusiast Edward.

In the Following day, The Guardian and The Washington Post Released Snowden’s leaked information on PRISM.

In the same meeting in the hotel, Edward also said that,

“I’m willing to sacrifice [my former life] because I can’t in good conscience allow the U.S. government to destroy privacy, internet freedom and basic liberties for people around the world with this massive surveillance machine they’re secretly building”

In the statement said by Snowden shows us that his intention was all to protect the world by the bad activities from NSA.

Before disclosing the fact of NSA by Edward, we could assume that is a lot of information on our mobile and laptop could be in the NSA department.

It shows us that all of the gadgets that we are using is the path of NSA for grasping the common data. There were different peoples made him a traitor while on the other hand there are more than 100,000 people who signed an online petition asking President Obama to pardon the person by late June 2013.

On September 13, 2016, the guy himself said in an interview with The Guardian that he would seek a pardon from President Obama.

When Edward seek for pardon, in the next day various human rights groups including the American Civil Liberties Union also known as (ACLU), all of them started the campaign and requested that Obama pardon Snowden.

The intentions of Edward were to live in the United States which would not harm any of the countries by grasping their personal information. The act of sharing information with the unauthorized person had made a strong loss which the national security bears in the face of billions of dollars loss.

When Edward was flying to Hong Kong for revealing the secrets of NSA files, there are few peoples he left behind and one of them was his Girlfriend Lindsay Mills.

Both of the partners had been living together in Hawaii, and the female had no idea of his boyfriend who disclosed all the classified information into the public. 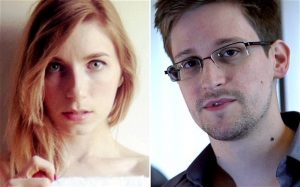 She was a graduate of Laurel High School in Maryland in 2003 and the Maryland Institute College of Art in 2007.

Lindsay started her career as a pole dancing performance artist while living with his boyfriend in Hawaii.

In January 2015, she joined the citizen four documentary team onstage for the Oscars acceptance speech.

The first film which featured the story of Edward was the Citizen four. In January 2013, when Laura Poitras started receiving a bunch of anonymous encrypted emails from “Citizenfour”, who claimed to have strong information and evidence about the illegal covert surveillance programs runs by the NSA in collaboration with the other intelligence agencies worldwide.

After five months, she along with the reporters Glenn Greenwald and Ewen MacAskill traveled to hong kong for the first of many meeting with the man who claims about the details.

The female also brought her camera with her, and the resulting film is history unfolding before our eyes.

This film is the documentary of all the meeting talks occurred between both parties, and you can watch the whole story by watching the whole video below.

Besides that, there is also a short film released on June 15, 2013. The name of this five-minute film is Verax, and it totally focused on the Edward Snowden leaking event in Hong Kong. The film was posted mainly on youtube and other sources.

Verax is the name selected for this short film, and the meaning of this word is “Truth Teller” in Latin.

Digits was another exclusive, original 4k curiosity stream series that takes viewers on a deep dive of the internet, the series is hosted by Derek Muller and he featured the interviews with Vint Cerf and Edward Snowden.

After creating a critical situation, the guy had a clear knowledge of not going back to the country as the government would not treat him the same, and the charges that imposed on him after the situation carries a maximum 10 years sentence to jail.

Edward who was living to a secure place in Hong Kong realized later after the charges that it is not secure now to stay further in Hong Kong. On 23 June 2013, he arrived at Moscow from hong kong.

He used the route of Ecuador and while traveling he also requested for political asylum. Due to the action charges of the U.S government, it becomes impossible for Edward to continue its journey further and his passport got canceled when he reached to the Moscow airport.

He spends the next six weeks on a transit area of Sheremetyevo airport until being granted temporary asylum in Russia on 1 August 2013.

In July 2013, he also got the opportunity from Venezuela, Nicaragua, and Bolivia. These three places agreed to offer him asylum but the guy soon made up his mind and expressed the interest In staying in Russia.

The lawyer of Edward also mentioned in a statement that Snowden would seek temporary asylum in Russia and possibly also apply for the citizenship later.

“In the End, the Law is Winning” this was the thanksgiving statement of Edward for Russia who gives him the asylum.

He has also published two books including “Everything you know about the constitution is wrong” and “Supernerds: Conversations with Heroes”.

The first book mentioned above consists of 201 pages, and the author of this book is Edward James Snowden. This book was released in 2013.

The second book was released on June 4, 2015. It consists of 164 pages, and the author of this book is Angela Richter, Julian Assange, Edward Snowden, Daniel Ellsberg, Jesselyn Radack, Willian Binney, and Thoman Drake.

According to the Wealth Record,

Happy-Birthday.info [All you Need to Know About Them]