To be honest, Polygamy is a relationship that is not something abnormal but Polygamy is usually frowned upon by society.

After all, commitment to relationships, notable marriage is supposed to be shared by only two individuals, But not for one Malaysian lady,

She believes her husband needed a 2nd wife because, in the time of pregnancy, she could not take care of her husband.

Khuzatul Atiqah and Samuel Dzul have been together since 2011. Many of you might think that having another lady to please your Husband is a crazy idea, but she did it and did so cheerfully.

“She shares her sentiments about her role as a wife and her concerns about her husband and kids on Facebook. She also mentioned that she is sick and her condition is not improving. She even reached the point of having a wheelchair to help her move around. She then wondered what will happen to her family if something bad happens to her.”

That’s she wishes to have another woman, She could help her family. Once she met with a lady named Nur Fathonah on social media,

After some time they both become closer, She then suggested Nur Fathonah marry her Husband.

After sometime Nur Fathonan agreed to the arrangement. Seeing that Atiqah has a beautiful family and that any individuals seem to get along just fine, She agreed to become the second wife of her husband. 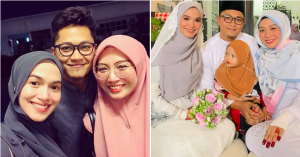 In one of her posts on social media, Atiqah’s mentioned how living with her in-laws made her realize that polygamy is not so bad after all.

A Japanese Billionaire is Giving Away $9 Million to People on Twitter to See if it Boosts their Happiness. Research says it might.