The research was conducted in more than 40 countries including Pakistan’s 23 million devices.

It disclosed that the smartphones of Samsung Galaxy offer faster 4G speeds in 35% of the countries, The bad news is that beating out Apple which was the Fastest Mobile company brand in only 17.5% of the countries.

In the remaining Markets, None of these Smartphones brands were the fastest.

The Smartphones of Samsung Galaxy had 8.4 MBps faster download Speed in the United State of America as compared to the Apple Smartphones.

Samsung Galaxy was also faster in Norway where it had a lead of 12 MBps over Apple and Huawei 14MBps. 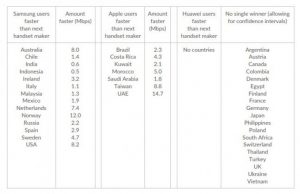 Apple Smartphones Performed better in the United Arab Emirates and Taiwan. Where they were 14 MBps and 8 MBps faster than Samsung Galaxy and Huawei commonly.

However, If we break down smartphones into a high tier, Mid-tier and low tier categories  (depending on the LTE categories they support).

Samsung Galaxy has the lead in the thigh tier Smartphones and iPhone comes in 2nd with Global download speeds averaging around 16.5MBps.

The Smartphones of Huawei displayed better performance in the low tier category. 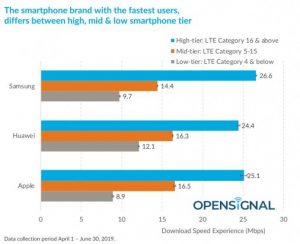 I will recommend you to keep in mind these are only 4G LTE download speeds, And these results might change following the global launch of 5G.

To everyone, it would be interesting to see how the 3 leading Smartphones Maker compares against each other after 5G launches.

Ministry of IT Briefs PTA About Cybercrime