All its members are no less than NEO-NAZIES that worship power, might and Secularism.

All those people who still support PTI could be FASCISTS, RACISTS, NEO NAZIES But in no way linked to Islam or the teachings of PROPHET MUHAMMAD PBUH or Ahl-e-Bait.

It’s a new terrorist organisation created by Deep State of Pakistan with Zionist approach to plunder all the resources of Pakistan and further destabilise it.

Keeping it in power would mean a straight attack on Islam and the ideology of Pakistan.

I HAVE NOT SEEN SUCH CRIMINAL VIOLENCE ON GAZA BORDER AS I SAW IT HAPPENING IN LAHORE.

Only a DEVIL ROTHSCHILD WORSHIPPER can kill and massacre MUSLIMS IN RAMADAN.

IMRAN KHAN Is the New Hypocrite Face of Dor-e-Fitn who excels in Public Speaking to deceive people using Quran and Hadith as his Magic to brainwash innocent minds. Any word from his mouth is that of a DEVIL.

PROPHET MUHAMMAD PBUH gave three signs of a Munafiq and Imran khan qualifies them all.

📌 Narrated Abu Huraira: The Prophet said, “The signs of a munafiq are three:

1. Whenever he speaks, he tells a lie.
2. Whenever he promises, he always breaks it (his promise).
3. If you trust him, he proves to be dishonest.

I bet if he is fasting, anyone doubting may take his blood test and make it public.
His dramatic marriage with Pinky Peerni and that tasbih in his hand is another way to convince people that he is religious while in fact he is just a puppet brought in power to wear an apparel that could help him reach his EVIL GOALS of executing the MIDDLE EAST PEACE PLAN efficiently with no finger points raised at him. 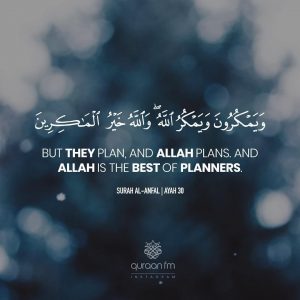 To the Deep STATE who thought they can create an organisation on the name of Khatm-e-Naboowat and they will act as guided just like PTI.

But looks like TLP is now completely out of their reach and under the control of its true LORD.

SHAME ON THOSE who use innocent minds for their political agendas and then massacre them when they are not needed.

This time their evil plots back fired! 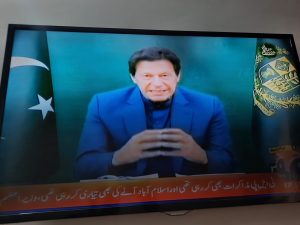 1. We can survive without religion but not trade.

2. If we take our religious believes too seriously, we will be boycotted by the European nations and we will die of hunger and thirst.

3. Let’s keep religion to masjids and homes completely impractical and let us move ahead walking shoulder by shoulder with the DEVIL to make PAKISTAN A COMPLETELY LIBERAL STATE powered by trade and commerce with the help of these SATANIC STATES.

4. WHY SHOULD WE ALONE SACRIFICE OUR LIVES FOR PROPHET MUHAMMAD PBUH, let others take the lead and we better focus on world goals.

5. We can give you a lollipop by convincing puppet Arab Countries who accepted Israel recently as a State to raise flags in honor of the Prophet. Hopefully we will win.

6. Let’s forget Khatm-e-Naboowat and focus on third layer of Corona and vaccinate everyone as my God Billgates is truly pissed at me for being incompetent.

If France products are banned here, more countries will take courage to do the same and trust me these EUROPEAN NATIONS can sell their souls to the Devil for money but can never compromise their trade and commerce. 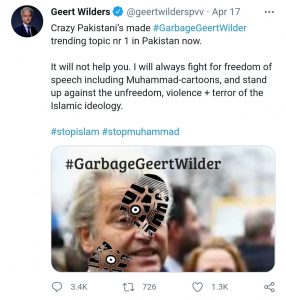 Geert wilder is so motivated with Rothschild’s sponsored PM Imran Khan’s swift action that he is now even more motivated to continue humiliating the LAST PROPHET MUHAMMAD PBUH by making more cartoons of him.

Geert now knows there exists no Muslim army left in the world with balls to look into the eyes of the blasphemists and put an end to their evil plans.

A salute to civilians who are more brave than hypocrites in uniforms. A Ray of hope of protest exist today thanks to this minority left with Emaan.

From Erdoğan To Imran Khan, all are warriors of Camera & Words and indirectly slaves of the NWO system. 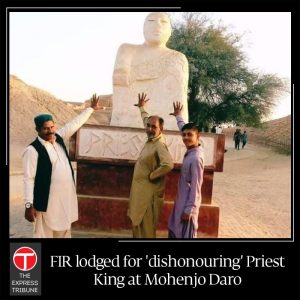 Worst days are ahead of us. 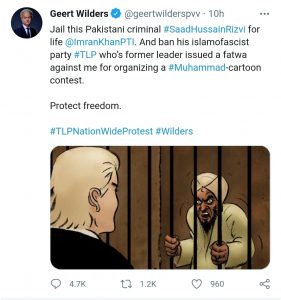 Well done Imran Khan and the selectors, verily your destiny is worst than Pharohs of the Egypt.

No State response and exile of France ambassador would now mean, Pakistani STATE no more worships Allah now but ONE WORLD ORDER.

TO HELL WITH YOUR NEUCLEAR BOMBS AND LUMBER ONE RANK.

INDIA: The Gathering in India Were Willingly Allowed