Before 3 months, Apple was one of the highest revenue company in the world.

But, since October 2018 almost $450 billion has been wiped out from its value.

It will shock you that the amount is more than the market cap of Facebook.

Apple has issued a warning note to investors ahead of its quarterly earnings call on January 29th. The key item of note is that revenue estimates are down from the projected $93 billion.

According to Business Insider South Africa,

Just three short months ago, Apple was on a high as the most valuable company in the world. 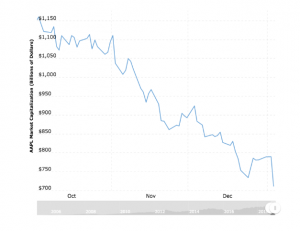 PewDiePie - Hackers are Taking over Chromecasts to Promote Their YouTube Channel

How Do I Change My Download Settings in Google Chrome 2019