The CEO of Amazon Jeff Bezos retained the title of the world’s richest man on Friday as Amazon.com Inc.’s stock recovered from a sharp slide.

According to the Bloomberg Billionaires Index, The shares of the biggest online retailer fell 1.1% to close at $1,761.33, a day earlier the rebounding from a drop of as much as 9.1% in extended trading,

After that, the company reported its first profit decline in two years worldwide. On Friday the net worth of Jeff Bezos was $109.9 billion and $2.36 billion more than the Bill Gate. 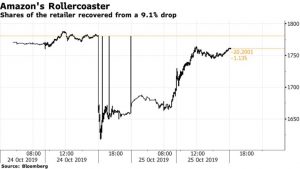 Jeff Bezos is the one who took the top place from Microsoft Corp. Co-founder in October 2017, Briefly swapped places with Bill Gates on an intraday basis but returned to the top place as Amazon relied on upon along with the broader market.

The world’s most valuable technology company, Microsoft has surged 39% this year, while boosting the value of Bill Gates’s 1% stake and bringing his fortune to $107.6 billion. The rest of Gates’s wealth is derived from share sales and investments made over the years by his family office, cascade.

Jeff Bezos (55) will be far richer if he and his wife Mackenzie Bezos hadn’t divorced. MacKenzie Bezos (49) receiving a quarter of their Amazon holding in July, on Friday His wife’s net worth was $35.4 billion.