This news was seen and claimed by some of the sources after a dark web seller whose name was identified as Gnosticplayers on dream market. The seller removed all the listing that was previously put in for sale.

It included the data amount of more than 600 million account records.

While removing the list, the data seller said that.

“All my listings have been removed, to avoid them being bought so many times and being leaked, as a respect for my buyers. But don’t worry, next round of breaches coming soon,” 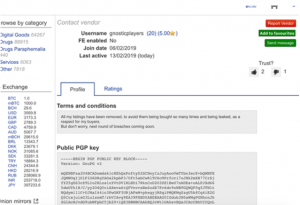 This was the actual written note of the person on his seller profile.

There are different news agencies which claim that the data from 16 different hacked websites were all part of the massive amount of account information that was up for sale.

According to The Register, those sites include Dub smash, Armor Games, 500px, My Fitness Pal, My heritage and many of the others.

You might be wondering what would be the response of these websites when they came to know about the data breach. Well, the answer to your question is mentioned below.

“We have started an investigation into these allegations, and we will notify users once we have confirmation and details. That’s all we have to say at this time.”

An exclusive report from The Register Stated:

“Spokespersons for MyHeritage confirmed samples from its now-for-sale database are real and were taken from its servers in October 2017, a cyber-break-in it told the world about in 2018.”

2018 has been the dark side for many of the security websites, social websites, and popular websites. The black hats are continuously attacking, fetching, and selling the data of every individual. All the government officials must need to response them with a solid strategy.

WhatsApp is Shutting down 2M accounts for Spreading Fake News