It’s not a journalist tweet but mindset of establishment at play currently.

There exists no current Muslim state in entire world filled with Emaan and ready to challenge Israel’s might. All that is done is just a show off of verbal games. 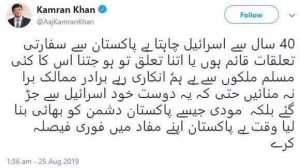 As per my research after Saudia and Egypt accepts Israel, Pakistani Generals are next in row.

Pakistani public will protest in roads for a month and then just like they got tired with Boycott France drama, they will get tired protesting the Pak-Israel peace deal.

The thing that will make it possible is a surveillance and cashless technology that will be offered to Pakistani establishment in 2022 that will bless them with a God like control over the public.

Pakistan has become the part of New World Order along with Turkey by participating in Covid19 script.

Mock me or ridicule me. This is the truth.

The Poison Billions Of Us Drink Everyday