Human need to get ready for future inequalities, because millions of jobs will be replaced by Robots and humans will be out of job, if they don’t have the skill that replaces Robots.

Oxford Study claims that 20 million manufacturing jobs all around the globe will be replaced by robots by 2030.

Read Also: If the Robots Come for Our Jobs, What Should the Government Do?

The next decade will be fearful for humans with no skills and experience because there comes more advanced and better than Humans that is Robots, They don’t get tired they do their tasks much faster than humans.

Around 14 million robots put to work in China Alone!

20% Proportion of the world’s robot stock located in China. Approximately every third robot is now installed there. Report claims.

“As a result of robotization, tens of millions of jobs will be lost, especially in poorer local economies that rely on lower-skilled workers. This will, therefore, translate to an increase in income inequality,” the study says.

Global GDP could rise to 5.3% if robot installation were boosted to 30%, more than the basic baseline forecast by the year 2030.

“This equates to adding an extra $4.9 trillion per year to the global economy by 2030 (in today’s prices), equivalent to an economy greater than the projected size of Germany’s,” the report states. 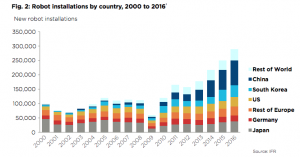 Three Reasons Why Robots Are Better and Businessmen Recommends?

The report from oxford economics take a deep look at the reasons why there is a huge robot surge expected in near future, let me share 3 top reasons for robots Surge.

By 2030, the connections will be starting to be made between AI and the human brain.
David ICKE

We have been through a process of preparation of getting people, first of all, stage 1, addicted to technology that they hold. Holdables, Smartphone, Tablets.

AI has a huge benefit to society because it increases the efficiency and output of any sort of task that humans perform. It is generating more revenue, cost savings, and job creations.

There is some sort of tasks which is impossible for a human but the machines are doing it easily. The AI allows us for completing work with creative aspects.

There are wrong perceptions occurs that with AI the human work will decrease but on the other side of the story, the combination of human and AI can complete the task more efficiently in the future.

As you all know that machines will do better than humans, so with this perspective there is a less amount of loss could control easily.

It could be beneficial for the armed forces when they perform any missions against the opponents. Because with the help of AI they can easily perform on any battles.

There are different surgeries which require a doctor, but with AI you can easily manage any sort of surgeries without going to any details as all the results will provide by the machines easily.

However, it will take some huge investments to achieve Automation at that scale.

James D’Arezzo also thinks awhile the hardware upgrades often will solve these issues this comes sometimes inordinate expense with Tokyo Institute of Technology Global Scientific and Computing Centre as an example to this.

The centre on edge to developing a Super Computer to meet the demands of the Artificial Intelligence (AI) and big data applications.

At the current situation the cost of hardware, it would almost take around $50 – $100 Million Dollars to build the Super Computer.

DON'T RELY ON FREELANCING OR VLOGGING TO PAY HOME BILLS