Everyone using the Face App to look how old they look… BE CAREFUL! Many security experts have raised concerns about how the app stores and handles your pictures and data… UK and US watchdogs are already looking to investigate… don’t use it! 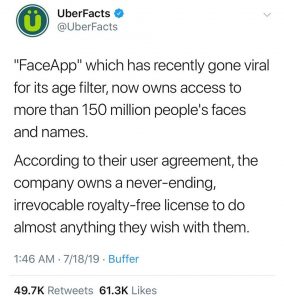 You may have seen many photos on different social media accounts of your friends and family posting their pictures of themselves right now and years in the future.

This most trending FaceApp is giving the people an opportunity to change their facial expressions, looks, and now age for several years.

But in the same time the people have been giving FaceApp the permission to use their pictures and names and they can use it for any purpose they wish to and for as long as they wants to. 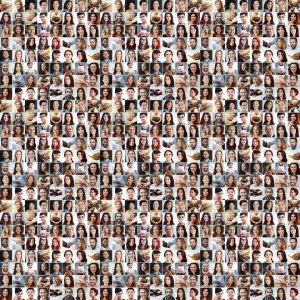 We have already learned the most important lesson from Cambridge Analytica but yet people use it, it means people really don’t care about their privacy.

FaceApp has over 100 million downloads on Google Play. And FaceApp is now most ranked app on the iOS App Store Platform in 121 Countries, according to App Annie.

You grant FaceApp a perpetual, irrevocable, nonexclusive, royalty-free, worldwide, fully-paid, transferable sub-licensable license to use, reproduce, modify, adapt, publish, translate, create derivative works from, distribute, publicly perform and display your User Content and any name, username or likeness provided in connection with your User Content in all media formats and channels now known or later developed, without compensation to you. When you post or otherwise share User Content on or through our Services, you understand that your User Content and any associated information (such as your [username], location or profile photo) will be visible to the public.

FaceApp Term of Use

It has 50/50 chances it may never be a dangerous and most likely may stay on Amazon servers in America but they still has the rights to own a license to do whatever they wish to do.

PhonesArena’s Peter Kostadinov Says: “You might end up on a billboard somewhere in Moscow, but your face will most likely end up training some AI facial-recognition algorithm”.

There are Five Things To Know Before You Use FaceApp

Well, whether privacy matters to you or not that is your own decision.

But, I will share what I have learn so far in past few years that viral Facebook apps that collects the data, which is always used for many purposes.

Always keep in mind, once you have uploaded anything to the cloud, you have already lost whether or not you have given away legal license to your content.

That’s one of the reasons why privacy sensitive Apple is doing most of its AI (Artificial Intelligence) work on device.

To make FaceApp actually work, you have to give it permissions to access your photos – ALL of them. But it also gains access to Siri and Search …. Oh, and it has access to refreshing in the background – so even when you are not using it, it is using you.

Why You Should be Worry of Using FaceApp?

Your photo could be used overseas, including Russia, whose government has been accused of interfering with the 2016 U.S. presidential election.

“Any app gathering data points that could lead to facial recognition should be of concern especially when it’s being used by government agencies, foreign companies or foreign intelligence,” Siciliano said.

Unhappy? You Won’t Be Able to Sue FaceApp???

“Except for small claims disputes in which you or FaceApp seek to bring an individual action in small claims court located in the county of your billing address or disputes in which you or FaceApp seeks injunctive or other equitable relief for the alleged unlawful use of intellectual property, you and FaceApp waive your rights to a jury trial and to have any dispute arising out of or related to these Terms or our Services resolved in court,” the company’s terms read.