Most of you often ask me how do I know most of these things. My answer is simple: Those who script PROBLEM-REACTION-SOLUTION follow a sequential order faded with knots. Spot the knot and you just solved a mystery.

Since 2018 when my mother  was in hospital, I was mentally not fit and I ABONDONED all my blogging career to pursue the path of eschatology. kept thinking why despite so much abundant wealth on earth, the manmade created bloodbath never seems to end.

Read Also: WHY IS MEDIA SPREADING THE DEATH COUNT PANIC?

Most who claim they know religion have hearts filled with Aqeedah but vacant when it comes to Emaan. The most followed is one who narrates sugar coated stories of the past but never speaks about the Pharoh of this era.

Nationalist mindset has taken over the minds of people and their hearts are polluted wth patriotic rhymes that talk less of Muslim Ummah and more of nationalism.

After having lost a brother who was shot dead six times and loosing a mother due to diabetes, a new soul emerged inside me. A soul that closed the doors at every one whose hearts are filled with nationalism and materialism be it a common man or even a renown scholar.

Yes I have seen blood, jail, bars, FIR, violence and after going through all these experiences, what I call myself today is a student hungry and thirsty for seeking knowledge through eschatology.

My leader is one i.e. Muhammad PBUH and if there is anyone who can update my software (several tried and failed) then it’s Allah alone.

My aim in life is penning down all that I come across. I have compiled my first research on technological ground and exposed the evil agendas of 2020 and 2030 in 2018. I barely mentioned religion in my first research on www.BitcoinIsScam.com but with RESEARCH#2 I will back it with spirituality.

My Next life in goal is penning down my RESEARCH two on spiritual ground as the enemies of mankind have jumped to Phase#2 of their agenda by releasing the UFO footage from Pentagon. They will not stop unless they have formed a One World Govt and One World Currency

Trust none but reasoning. Question every thing and follow your inner voice. Do not panic because those who panic will die first in this war of nerves.

Keep your faith on God, act as humans first, muslims later and nationalists(bots) never as it feeds hate.

Penning down with the answer on when will this coronavirus script end. Attaching below the blog post from the UniCorp frontman BILL GATES who answers when and how this PLANdemic Will end.

Read Also: TAIWAN: Unaffected By Covid-19 Even No Lockdown, No Closed Business

Before you read it, remember you can not fight this system nor escape it but you can surely trick it. Stop following the shepherd and the Dog as they are one.

Umar Rashid Says, “This man has planned ahead of everyone. Same like Polio, composition of this vaccine will never be disclosed and our newborn will be the ultimate victims in near future. May Allah protect us.” 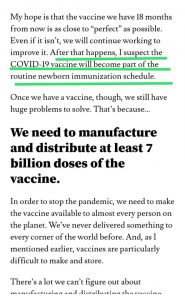 Every Pakistani Must Listen This Video, Logics and Real Facts