People in Pakistan and India Thinks that Bill Gates Gives His 99% of Wealth in Charities But Lets Dig into Little Deeper To Understand The Truth Behind This.

Billionaire Should Not Exist

Human brains have not evolved to understand large numbers. As a result, we tend to vastly underestimate how large “One Billion” is.

If you earned $50 million in your lifetime, you would consider yourself rich… but you would still be $950 million away from being a billionaire.

A billion is such an incomprehensibly large sum of money that It would be difficult to actually spend.

That’s what we mean by “hoarding wealth.”

There is absolutely no reason why anyone should hoard more wealth than they could spend in their lifetime while others are homeless, starving and dying of curable diseases.

The Wealth Gap is Increasing

The world’s top 26 billionaires own as much wealth as the poorest 3.8 billion people.

Billionaires got $565 billion richer during the pandemic, making $42 billion a week on average.

The combined wealth of the world’s billionaires reached $9.4 trillion. 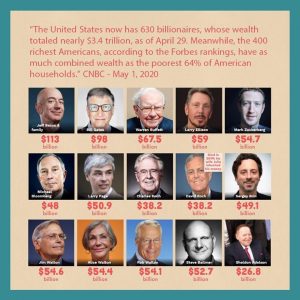 There are two ways to become a billionaire:

A billionaire is not working 70,000 times harder than a janitor. Labor creates wealth. 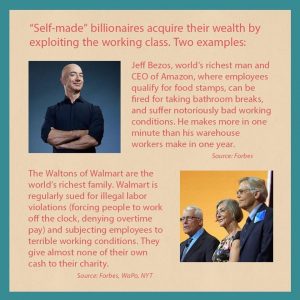 Jeff Bezos made headline for donating $100 million to Feeding America in April. He makes $215 million a day.

Bill Gates donated $589 million to charity in 2019. That’s 0.6% of his $98 billion net worth. His foundation is also neocolonialist nightmare for many reasons (Google This)

But, even if its just a tiny fraction of their net worths, aren’t hundreds of millions of dollars still doing good?

No, because that wealth they are donating came directly from exploiting the poor. Throwing a teeny fraction of the money they stole back to charity doesn’t erase that. Billionaire’s existence reinforces the conditions necessary for extreme poverty to exist in the first place, and vice versa.

Billionaire Pay Less in Taxes Than We Do

“American billionaires paid less in taxes in 2018 than the working class – another sign that one of the biggest problems in the US is only getting worse. In 2018, billionaires paid 23% of their income in federal, state and local taxes, while the average American paid 28%.” 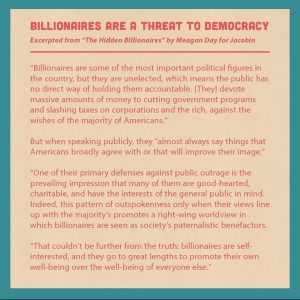 Billionaires Truly Do Not Give a F*CK

It would cost $20 billion to end homelessness in the US. Mike Bloomberg could do that tomorrow and still have $28 billion to his name.

Halting global warming would cost $300 billion. The world’s 10 richest people could each throw $30 billion and still have $386 billion among themselves.

Many of us are only one really bad year – one medical issue, one lost job – from complete financial ruin. Absolutely none of us are one really good year away from becoming billionaires.

They don’t care about us. Don’t cape for them, don’t claim them, don’t defend the indefensible.